"Nes Bsamneh W Nes Bzeit" is a 35-minute street performance with giant puppets, based on Kafa’s documentation of testimonies of victims of domestic violence in Lebanon. Starting with a marriage/funeral procession, the performance uses local proverbs and twists popular sayings to shed the light on the situation of thousands of women who have no law to protect them against abuse. Through a direct address to the public, "Nes Bsamneh W Nes Bzeit" exposes the daily horrid experiences of these women as a cry supporting the decree of the law against domestic violence in Lebanon.

"Nes Bsamneh W Nes Bzeit" is a Lebanese saying meaning "some people are smeared with oil and others with grease" symbolizing the different values assigned to different people and pointing out discrimination.

Written and devised by: Zoukak

Co-produced by: Zoukak and Kafa Association as part of “16 days of activism against gender based violence 2011: Towards Protection of Women". 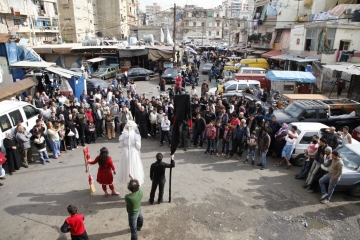