The Story Of The Man Who Inhabited His Shadow

The Story Of The Man Who Inhabited His Shadow
Theatre Performance
By Fadi Toufiq in collaboration with Hashem Adnan and Shereen Suleiman
Saturday 10 of November at 11:00 a.m. at STATION, Beirut

Synopsis
A theatre performance taking place at the space of an art exhibition. The audience will tour in the company of a solo performer to explore with him the installed works. A performer who plays two roles: a guide to the exhibition and an author telling the story of the man who inhabited his shadow and his works, examining the contexts in which these works where developed. Using fiction, the performance suggests a different view on the presented works, opening the door for the audience to go beyond perceiving them as several unfinished works, but rather as accumulated chapters of the same continues work.

Artists' Biography
Fadi Toufiq is a writer & an artist, born in Beirut 1975. His works varied in medium: books, video, installation, performance… His main interest lies in deconstructing Grand Narratives and reconstructing fragmented events, as close as possible to the way it unfolds, and strikes those who lived it, as oppose to the “mediatized conflict” produced usually by journalist. His performative intervention and installations have been shown in different locations and venues around the world, including Württembergische Kunstverein, in Germany, the MUMOK in Vienna, Performa, in New York and the Centre chorégraphique de Rennes et de Bretagne in France.
Hashem Adnan is a theatre maker based in Beirut. His work has always been focused on theatre and performance as a space of re-creation of reality, outside the realm of the dominant social, economic, and political infrastructures. From 2007 to 2017, working with the award-winning Zoukak Theater Company, he has taken part in staging over 15 performances, alternating roles between writer, performer and director. He has performed locally, regionally and internationally with Zoukak and other collectives. As a trainer, he has led several social intervention projects and workshops before diverse audiences and in various contexts both locally and abroad. 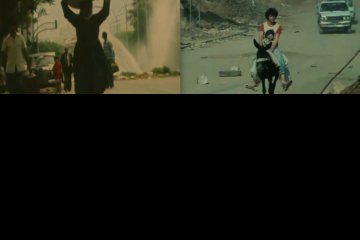