The festival includes a rich variety of short films, from different genres, directed by filmmakers from all around Europe, such as France, Germany, Slovenia, Sweden, Finland, Croatia, Spain, UK, Romania and Hungary.

29 awarded films will be screened at Mansion on November 14th and Zoukak Studio on the 20th and the 21th.

This festival is organized and sponsored by the Transit Film Festival Association and collaboration with Nadi Lekol Nas and Movies on the Move.
TRANSIT FILM BAZAAR / https://www.facebook.com/ShortFilmsMigratingCinema/ www.lisff.blogspot.com / www.lidff.blogspot.com

1-‘WALLS’
Maik Schuster & Fatmir Dolci & Max Paschke- Germany, 2017
7min
A short film dealing with the energy generated through human confrontations with walls. The urge for freedom and fulfillment is just as human as the urge to build walls for everyday order. Three individuals in different countries are struggling under this tension – and finally decide to go all in.

2- ‘GOOD LUCK, ORLO!’
Sara Kern- Croatia & Slovania & Austria, 2016
14min
After a dramatic event, Orlo watches his parents being consumed by their grief. He wants his family to be normal again. When an opportunity arises, Orlo takes things into his own hands, but this is more complicated than he had imagined.

3- ‘GENERATIONS’
Sune Sorensen -Denmark, 2018
11min
In a final attempt to re-connect after years of falling out, Alex – encouraged by his mother – embark son a road trip with his father in their old family Beetle. The car that Alex hates and his father loves,becomes an intimate setting for two stubborn men, who are forced to deal with their issues as they are both literally and figuratively brought together. The journey becomes a bumpy ride filled with conflicts as well as shared memories of a past closeness, which has long since turned cold.

4-‘GIFT’ Katalin Oláh & Sándor Csukás -ROMANIA & HUNGARY, 2018 14 min
Modern ballad of an old man and his grandson. In a distant corner of Transylvania, at the far end of an almost empty village, in a tiny little house, a lonely old widower has given up on life. A bus winds its way through the snowy landscape, bringing a surprise Christmas visitor. The unexpected arrival of his grandson changes the plans of the old man. Can the young boy and the old man, both closed into their own world, find connection through new technology?

5- ‘YELLOW’
Ivana Šebestová- Slovakia, 2017
6min
The short film is built on the animation game, visual associations, the magic of classical music and symbolism of colors: yellow as pleasure and violet as sorrow. It is a story of an opera singer which is scared of everything yellow, sunny and spontaneous and separates herself from the world to be able to devote to profession. She hides herself in sad and violet shadows. Boundaries of neatly structured world make her feel safe. But this kind of life destroys not only herself but also her music. At the peak of career, she finally opens to her life and finds happiness.

6- ‘TOO – TASH’
Dariusz Sipowski- UK & Poland, 2017
15min
‘Too-Tash’ is a short documentary from the Pamir Mountains in Tajikistan. An old Kirghiz nomad tells a tale about past times, when people and ghosts used to live together.

8- ‘ARIA’
Myrsini Aristidou- Cyprus & France & Greece, 2017
14min
Athens, today. Seventeen-year-old Aria, who is working at Jimmy’s local kebab place is waiting for a driving lesson with her father. When he finally arrives, it is not to go for a drive; on the contrary, he confides in her the care of a young Chinese immigrant who speaks neither Greek nor English.

1- ‘THE CHICKEN’
Una Gunjak -Croatia, 2014
15min
As a present for her 6th birthday, Selma gets a live chicken. When she realizes the animal is going to be killed to feed the family, she decides to save it and set it free, unaware of the high stakes such action will lead to. While trying to bring back the missing chicken, Selma's mum becomes the target of a sniper shoot. It's Sarajevo, year running 1993.

2-‘THE SOUP’
Nicos Synnos- Cyprus, 2016
11min
A man has two chickens. When one chicken gets ill, the man kills the healthy chicken to make soup for the ill one. This is a tale that inverts our stories about priorities… and scratches at the thin line between love, life and nonsense.

3-‘CHASM OF SUN’, chest of your shell
13min_Finland
Experimental documentary from Kirmo Ekholm.

4-‘REMEMBER’
4 min_Finland
A film about memories and change.

5- ‘SILENCIO’
8min_Finland
The film explores love (and the lack thereof) and the decision to have a child with your lover when you already have a family.

6- ‘LETTERS HOME’
14min_Finland
Six under-aged asylum seekers from Afghanistan and Irak write a letter to a relative back home. Finland is safe, but the journey is not over yet. It’s still uncertain whether this is the place where they can have a family of their own one day. The letters are filled with questions, longing, confusion and hope.

7- ‘CAT DAYS’
Jon Frickey- Germany, 2018
11min
Jiro, a little boy, feels sick. His father takes him to the doctor's. She diagnoses a harmless condition.
But it shakes the core of the boy's identity.

8- ‘DEMOCRACIA‘
Borja Cobeaga- Spain, 2013
11min
The manager of a company proposes a daring plan for keeping the workers’ morale high.

1- ‘MERYEM’
Reber Dosky- Netherlands, 2017
17min
Filmed during the battle of Kobani, this film reveals the women at the heart of the fight against IS. With stoical perseverance and the aid of American airstrikes, these women are leading the fight for freedom.

3- ‘JULULU‘
Michele Cinque- Italy, 2017
15min
A musical journey into a corner of Africa in southern Italy covering the vast plantations of tomatoes in the province of Foggia. Badara Seck, a Senegalese riot, passes through the area like
a shaman guide in search of Jululu, the soul of Africa, towards one of the ghettos where the immigrant laborers throng for the harvest season. Sagnet, the spokesman who led the laborers’ revolt against the ‘gang master system’ in Italy, narrates the film. Through his thoughts the social criticism of the ghetto expands to include the whole economic system determining the conditions of a new form of slavery.

4- ‘IN/OUT’
Olivier Guerpillon- Sweden, 2015
21min
A Swedish family comes to Morocco for a day trip on a tourist bus from Spain. They visit Tangier, the famous harbor city by the strait of Gibraltar, at the doorstep of Europe. Mehdi is a street kid from Tangier with dreams of his own. Their paths will cross during some hot summer hours.

5- ‘EUNA’
Seung-Hyun Chong- Germany, 2017
19min
Meet Euna, a young woman, working in a factory, seeing friends, trying to come to grips with her life. But why is it that she seems to struggle so much and why do some folks behave so oddly, when she is around?

6- ‘A GIRL LIKE YOU’
12min_Finland
Sampo used to work as a chat moderator, but this wasn't an ordinary chat.

1-‘FATHER`S DAY’
Edmunds Jansons- Latvia, 2012
5min
For people Father’s Day is a celebration, but for one small bird - an ordinary working day. And concerns are the same old - to get food for his family.

2- ‘SWAMPFOX‘
Terje Henk- Estonia, 2017
6min
Sand animation about three people and one fox. How obsession pulls, friend refuses to let go and how hard it is to forget. It’s a story of a situation so muddy it’s difficult to come out of it intact. The wicked fox can’t help even if she really wants to.

3-‘THE REMIGRANT’ Astrit Alihajdaraj -Austria & Kosovo 21 min 2017 The Remigrant tells a story about Bashkim (50) and his son Besnik (17). They have a lot in common. They both had to leave their homes at their young age. The father had to flee to Austria because of the war in Kosovo and his son has to go back to Kosovo at the request of the father. The return to Kosovo after seventeen years in Vienna is a hard growing up test for both of them. The strong desire for the place of childhood connects and separates father and son at the same time.

4- ‘DAISY CUTTER’
Enrique García , Rubén Salazar- Spain, 2010
7min
Daisy Cutter tells the story of a ten years old girl, Zaira, who (like many others) experiences the injustice of war, with the perspective that her tender and naive eyes allow her. Zaira gathers daisies every day for a friend that she misses; so as not to forget him, so as not to lose him.

5- ‘LEO’
Julian Alexander- UK, 2017
15min
Desperate to make money, Léo accepts a job smuggling a refugee couple through France. However, Léo and the couple have separate expectations concerning their destination. He’s forced to confront the couple, his boss, and himself in order to understand how far he is really willing to go for these people he never intended to help.

6- POST-WAR DREAMS
25min_Finland
The film is based on interviews of Finnish people, who survived the Second World War, and archival discoveries.

7- ‘AFTERNOON’
Kati Glaser- Hungary, 2017
10min
Sitting in park, we might well think that there is nothing in particular happening around us. But if we give ourselves a bit of time, behind the visible layer of the world an invisible dimension opens to us, the tremendous space of tiny details, which are so difficult to capture in words. 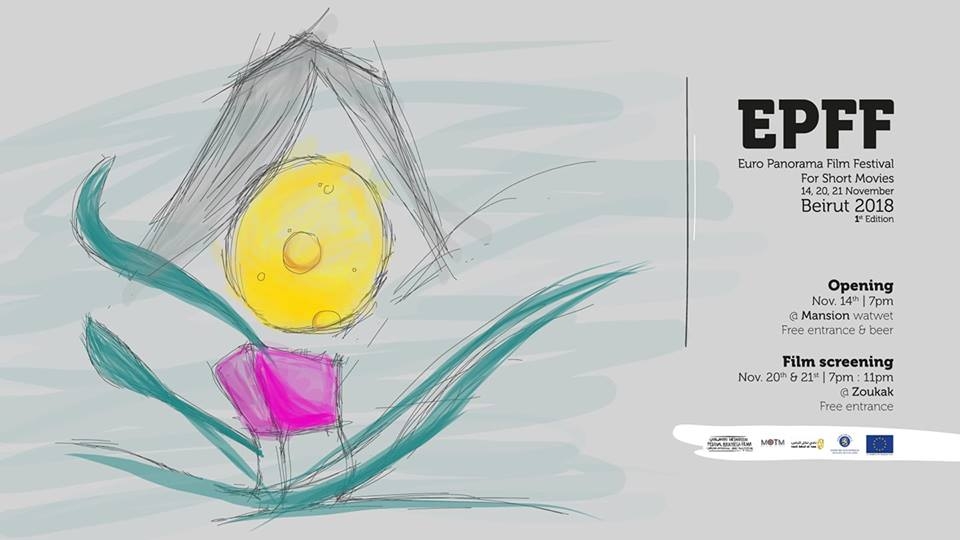